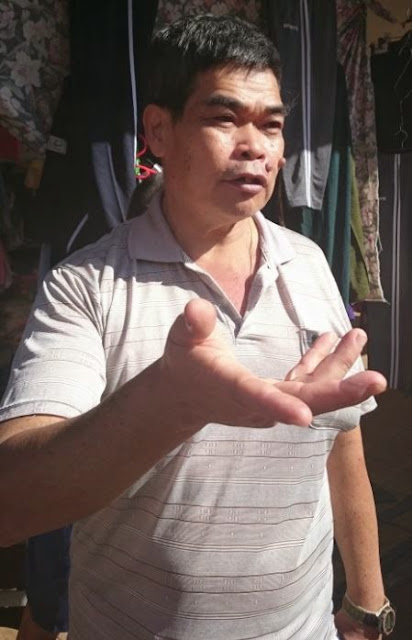 I bumped into our famous satayman at the Redhill market this morning.

Had a quick chat with him to find out how he is doing.

Seems that he will be selling satay from Good Chance Popiah (Jalan Berseh branch) when he is ready.

He seems excited talking about his career upgrade and he just need to pass the food preparation course before he start selling there.

He said the boss of Good Chance Popiah will be putting up newspaper advertisements to inform people about the satay when they are ready.

When asked why he did not consider Tiong Bahru market, he said the crowd at the market was not good enough according to Good Chance Popiah boss.

(Actually our satay man doesn't need a ready crowd, am sure he is heavy weight enough to pull in the people and revitalize the evening crowd at the market...oh well)

By the way, it won't be sold at the same price as before and they seems to have plans about making it into a chain and perhaps expand overseas as well.  And they will call it the Tiong Bahru Satay or something with the Tiong Bahru label.

Some of you may remember we almost lost our satay man to China a few years back when someone offered him a job there to sell satay. It's the same boss who is giving him the opportunity again.

This is also the boss who came and fetch him to NEA and help him pay the fine.

Mr Satay man also offered some insights into how he was busted 3 times for illegal hawking over a period of 2 weeks.

He claimed that on one occasion, someone set him up by ordering 400 sticks and left after eating just 1 stick. Thereafter 2 NEA enforcement officers and 2 policemen showed up.

He also mentioned a couple who heard about his plight and ordered 50 sticks of satay. And they gave him an Ang Pow to pay off his fine when they collected their satay.

So yes, our satay man is doing fine....just hoping against hope that he will reconsider setting up shop in the estate that he started serving those sinful fatty satay.

Meanwhile, keep calm and keep drooling till he get his certifications.
Posted by SGalf at 5:54 PM