ONE BLOCK, THREE STREETS...
MAIL TO THE WRONG PLACE 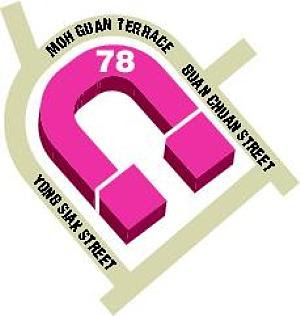 Tiong Bahru's Block 78 leaves many confused
HE raves about the crispy kaya toast and thick coffee served at the kopitiam on the ground floor. 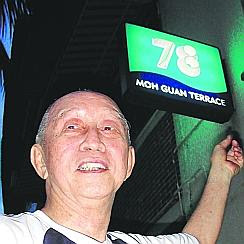 HE raves about the crispy kaya toast and thick coffee served at the kopitiam on the ground floor.

But he rages about mail getting lost, groceries delivered at the wrong place and visitors knocking on wrong doors.

His block, a U-shaped 70-year-old art-decor pre-war development, has three street names attached to it.

And depending on which side of the block your flat is located, your address will be different.
Flats in the centre of the block have the address 78 Moh Guan Terrace.

All three roads are connected to the block which was designed and built by the British in 1937.

It has four storeys, 166 units of two, three and four-room flats, and 10 shops on the ground floor.

According to company director Mr Jackie Wong, 70, who was born in the block in 1937 and is still living there, the street names have been there for as long as he can remember.

WHO'S KNOCKING ON MY DOOR?
Mr Wong recalled an incident when a stranger turned up at his door, asking his 'son' to report to the army camp for 'duty'.

The 'son' turned out to be his neighbour on the other side of the block.

Mr Wong felt that a repositioning of street signs could solve the confusion.

But renaming the block as 78A and 78B would mean residents 'have to change ICs', he said.

So why cause such confusion in the first place?

THOSE QUIRKY BRITS
Blame it on the British who are known for their quirks, said Dr Kevin Tan, president of The Singapore Heritage Society.

Dr Tan said: 'In the small streets of England, it won't be surprising to see that roads and numbers don't always correspond. The British are fairly comfortable with a bit of quirkiness.'

Also, the roads could have been meant for use as service roads without the consideration of having a block, Dr Tan added.

Thus, when the block was built, 'planners may not have conceived of an exercise for the block to have one street name, such as Moh Guan Circle'.

But housewife Madam Annie Zhao, 58, is more concerned about the rubbish than the confusing addresses.

She said: 'Nowadays a lot of owners rent their flats out to foreign workers.

Where the streets have meaningful names
Businessman Seet Moh Guan, the fourth descendant of a notable Hokkien clan, donated a large sum of money to build a library in 1854