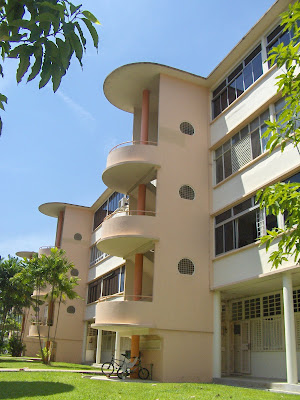 The HDB Post War flats are rather angular and the shapes are very standardised. Some people always refer to it as the ones with the round balconies. Actually, they are not balconies but the staircases for the residents to climb up to their unit. It is also what makes the building unique and charming.

These flats were built from the 1948 - 1951 period. It was built by the Singapore Improvement Trust (SIT). Some people refer these flats as the LIM YEW HOCK flats but I do not think they are built during his reign as Chief Minister of Singapore as he only took office in 1956. So to call these the LIM YEW HOCK's flats is actually inaccurate. I usually call them the SIT flats but that still does not clear up the confusion as the PRE-WAR section are also built by SIT.

An easier way is to identify them by the block number. Blk 17 to Blk 50 are flats which requires the buyer to comply with the HDB's eligibility scheme.

Originally, these flats were rented out and later, resident were "encouraged" to buy them in 1973, when HDB took over the responsibility of running the estate.

Blk 55 to Blk 82 are the Pre-War Conserved flats which were privatised in 1965 to 1967 under the Government's pilot Home Ownership Scheme. The conservation status was only awarded in 2003. 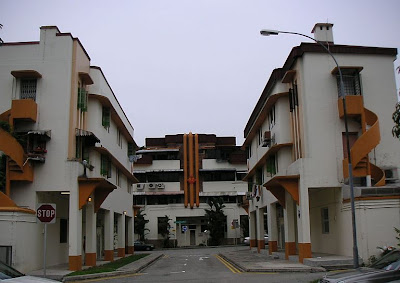 These flats were built in 1936 and most of them survived the bombing of World War II. Blk 78 Guan Chuan Street even has a bomb shelter beneath them.

The walls of these buildings are really tough. If you even need to hack away these "historical" wall, your contractor can get rather creative with his choice of words while hacking them.

Although these buildings look almost the same from the outside, the buildings actually contain apartments of various sizes. Even the building height is rather varied. Some buildings are a mixed 2 to 3 storey high while some are as tall as 5 storey. The "super senior" taxi drivers will always refer this place as the "GOR LAU CHU" (5 storey flats). (Do not attempt to utter this to the modern day taxi drivers...unless you have a lot of time or is dying to start a conversation.)

how abt blk 81 and 82? are they conserved too? it wasnt included in your list above.

Wow, thanks for pointing out the error. Yes Blk 81 and 82 is part of the conserved area.

I will amend the main article.

thank you! cool man, i can live here until my last breath :)

Thanks for the post, the pre-war flats look very charming. Never knew about them cause I don't hang around Tiong Bahru.

can you tell us about why the few blocks along blk 48 Moh Guan Terrace hasn't got the round staircase landing as characterised by the rest of the hdb blocks? They were not built at the same time i presume?

You Must Add Value said...

i live in a unit that has been cut in half and converted to two units. I share the same mailbox with another tenant who occupies the other half of the original unit. I wasnt aware the buildings are conservation....should I be concerned I am potentially living in an illegally modified unit...or is this no big deal?